The Bornean bearded pig (Sus barbatus), also known ambiguously as the bearded pig, is a species in the pig genus, Sus. It can be recognized by its prominent beard. It also sometimes has tassels on its tail. It is found in Southeast Asia—Sumatra, Borneo, the Malay Peninsula, and various smaller islands like in Sulu archipelago such as Tawi-Tawi, where it inhabits rainforests and mangrove forests. The bearded pig lives in a family. It can reproduce from the age of 18 months, and can be cross-bred with other species in the family Suidae. 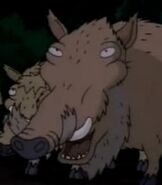