The Parody Wiki
Register
Don't have an account?
Sign In
Advertisement
in: Characters, Animals, Ocean Animals,
and 30 more

The bowhead whale (Balaena mysticetus) is so-called because of its bow-shaped mouth and is black in colour with a whitish chin patch, broken by a 'necklace' of black spots. This whale lacks a dorsal fin and is usually visible as two bumps from above water, which correspond to the head and the back. The blow (or spout) is produced from the two widely spaced blowholes, and is a bushy V shape reaching seven metres in height. The baleen is dark grey to black in colour and is the longest of any whale; sometimes measuring well over three metres in length. Females are larger than males, but otherwise the two sexes are generally of similar appearance. 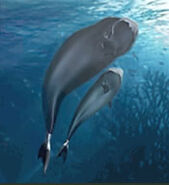 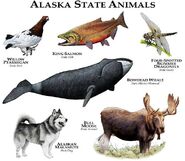