Bradley the Skunk, aka Numbuh 6, aka R.O.B.O.-B.R.A.D.L.E.Y. and aka Bradley Precious Squirrelsky is a baby striped skunk that was discovered and adopted by Numbuhs 2 and 3 in Operation: C.A.M.P. with Numbuh 5 serving as Bradley's Godmother. During the preparation for a mission to Camp Lemmeouttahere, the members of Sector V were preoccupied by their new pet, much to the disdain of Numbuh 1. However, when the mission is carried out, Bradley saves the day by awakening Chester's brainwashed campers with his spray. Bradley is then made an honorary member of the Kids Next Door and dubbed "Numbuh 6" as he now resides in his father's baby carrier since he is the adopted son, who has been adopted by Stephen, Sandy, and their friends. In Operation: H.O.S.P.I.T.A.L., Numbuh 6 was hit by a car and mortally injured, while on an undercover mission to spy on Numbuh 5's older sister, Cree Lincoln. He was sent to a hospital which, by chance, was the base of Cree's current operations. When a team of surgeons failed to save his life, Numbuhs 2 and 3 saved Bradley's life by turning him into a cyborg or, as Numbuh 2 puts it, "a half skunk, half KND operative, half butt-kicking machine", R.O.B.O.-B.R.A.D.L.E.Y, who proceeded to defeat Cree in a one-sided battle.

Numbuh 6 also appears in Operation: S.I.X., in which he joins Numbuh 3 and Numbuh 2 on their supposed soda smuggling mission.

As a normal skunk, Bradley's only real abilities were his cuteness, and his skunk spray.

After being transformed into R.O.B.O.-B.R.A.D.L.E.Y. he gained enhanced strength (enough to easily knock Cree down) enhanced vision and laser vision through his cybernetic eye. His natural skunk stink was made even stinkier by his cybernetics.

Kessie and Bradley (in color) 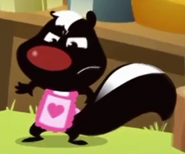 I've got a pink apron with loveheart on 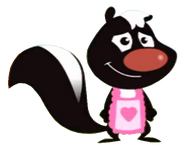 I look okay with this apron on.

Bradley ties his apron on

Poor Dad.
Add a photo to this gallery

Stephen with Bradley in his baby carrier

Bradley lands in the water with a loud SPLASH!

We're sliding too fast!
Add a photo to this gallery 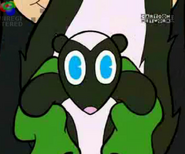 Bradley (Vampire) (Halloween)
Add a photo to this gallery

Retrieved from "https://parody.fandom.com/wiki/Bradley_(Skunk)?oldid=1929546"
Community content is available under CC-BY-SA unless otherwise noted.