Brain is the tritagonist in the Inspector Gadget franchise. He is Penny's dog who is the only one that knows Penny is the one who solves Gadget's missions.

Brain typically has to follow Gadget to wherever he is going on his missions and has to disguise himself as a civilian to prevent Gadget from noticing him. Only to find out that Gadget thinks he's a M.A.D agent or another type of person, even though it's obviously him.

Brain always stays close to Gadget to keep him safe during his missions and usually saves him from being eliminated by M.A.D. agents. Brain is a master of disguise and disguises himself to keep being recognized by Gadget. Gadget often mistakes Brain as a M.A.D. agent, often chasing him and trying to arrest Brain. Despite Brain's quick wits and last-minute rescues, he would have also failed to solve the mission assigned to Gadget if Penny wasn't secretly separated to help solve the case as well. This is the story line for nearly all the episodes. However, all of M.A.D. agents' attempts to kill Gadget were not all entirely foiled by Brain; in every episode, Gadget managed to escape death by pure luck a few times or by a rare moment of competence and usefulness.

Brain has yellow fur, white patches on the tips of his ears, and a red nose. He wears a red collar that contains a retractable microphone and speaker to keep in contact with Penny. Penny quickly understands what Brain says, even though he only makes dog-like sounds and never actually speaks. He spoke in the Gadgetinis episode, No Brainer, due to Penny building him a translation collar.

In the CGI version, he tends to stand upright, his fur is more orange and the tips of his ears are a light orange. His collar now projects video calls from Penny. 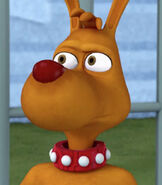 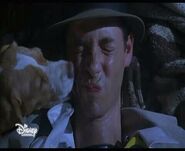 Retrieved from "https://parody.fandom.com/wiki/Brain_(Inspector_Gadget)?oldid=2536453"
Community content is available under CC-BY-SA unless otherwise noted.