Brainy Barker is a character from Krypto The Superdog. She is a beautiful purple Afghan hound.

As Elizabeth Swann in Animals Of The Caribbean

She is a governor's daughter

As Maggie in Home On The Tundra

She is a whippet angel

As Bastila Shan in Star Wars: Animals Of The Old Republic

As Lady in Brainy & The Krypto

She is a family's pet

As Sawyer in Superdogs Don't Dance

As Avatar Kyoshi in Avatar: The Last Airbending Animal

She is an Earth Kingdom-born Avatar

As Cub Nala in The Wolf-Dog King (Puppy Form Only)

She is a goddess

She is a Russian princess

As Vanessa In The Little Huskey

She is Ursula's Disguise

As Wonder Woman in The LEGO Movie (CoolZDane Animal Style)

Get off of me.

Arnold climbs on his mom's cape.
Add a photo to this gallery 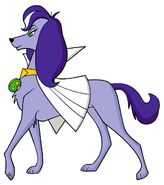 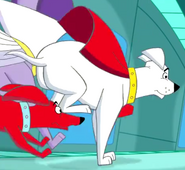 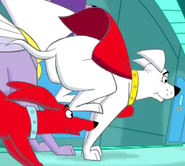 Retrieved from "https://parody.fandom.com/wiki/Brainy_Barker?oldid=2559371"
Community content is available under CC-BY-SA unless otherwise noted.