The Parody Wiki
Register
Don't have an account?
Sign In
Advertisement
in: Antagonists, Characters, Male Characters,
and 66 more

Bratty Kid is an unnamed minor character who first appeared in "The Loud House" as the secondary antagonist.

He looks rather similar to Lincoln. He wears an orange t-shirt, navy blue jeans, gray socks, light blue sneakers, and a white beanie. He has blond hair, light fair skin, and buck teeth. The only feature he doesn't have that Lincoln does are the freckles and the white hair, as well as a round head shape.

He likes getting what he wants, and is willing to do anything in his power to succeed, even if it means having to create a big mess and a lot of ruckus. After he took the last Zombie Bran away from Lincoln in the store, he mocked the latter for being too slow, calling him "Pineapple Boy", and makes a mess behind to slow him down before he buys Zombie Bran. After Lincoln exposed him, his mom grabbed him by the ear in anger and left the cereal her son wanted. He was devastated by this. 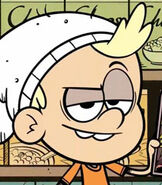 Bratty Kid in The Loud House
Community content is available under CC-BY-SA unless otherwise noted.
Advertisement