Start a Wiki
Bravoceratops is an extinct genus of large chasmosaurine ceratopsid dinosaur that lived approximately 70 million years ago, and is known from the Late Cretaceous Javelina Formation in what is now Texas, United States. Bravoceratops was a relatively large and heavily built, quadrupedal ground-dwelling herbivore. This discovery is significant paleontologically because ceratopsian dinosaur remains occur only rarely in the Javelina Formation, and Bravoceratops provides useful temporal and paleobiogeographic data to researchers about the proliferation of chasmosaurines from Edmontonian to Lancian time during the Late Cretaceous. 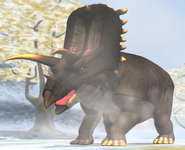 Add a photo to this gallery
Retrieved from "https://parody.fandom.com/wiki/Bravoceratops?oldid=2082535"
Community content is available under CC-BY-SA unless otherwise noted.