The Parody Wiki
Register
Don't have an account?
Sign In
Advertisement
in: The Middle characters, Heroes, Kids,
and 26 more

Brick Ishmail Heck (Born November 3rd, 2001) is the youngest child of Frankie Heck and Mike Heck, who loves to read and has quirks or habits of whispering to himself. This happens when certain words catch his ear and he wants to hear them again, quieter. He is exceptionally smart, but is easily tired, leading him to procrastinate or just forget his homework assignments and other projects. He has Osteogenesis Imperfecta (OI, for short. Brick and the actor both have OI type IV.) He tends to isolate himself from classmates. He acquired a certain tick where he shouts "Whoop!" in Bunny Therapy. Apparently he whoops when he lies as shown in The Hose. His parents Frankie and Mike call this "whooping". His quirks include obsessions with reading, unusual speech patterns, and difficulty fitting in with his peer group. In a few episodes, Brick was known to have an obscure interest in fonts and he has even created a blog based on fonts in one episode. He is portrayed by Atticus Shaffer. Brick's strangeness results in his parents, Frankie and Mike Heck, having to attend the annual talk with Brick's teacher. Frankie and Mike also have to attend his social group classes. In these situations, Frankie and Mike try to explain that Brick is not special or weird but in the end Frankie usually admits that he is special.

He always remember things he reads, such as how to repair a lawn-mower in The Block Party, due to having a eidetic memory. He is very awkward, and doesn't have many friends, but makes friends with a equally awkward boy called Arlo, but struggles to deal with him. Brick is also a brilliant speller and almost won the regionals but was disqualified by a strict judge when he whispered the last letter to himself. However, in his second year of the competition, he was eliminated in the first round of his local school competition by misspelling "Reindeer", with the classic mistake of spelling "Reindear".

Frankie and Mike are always trying to solve more important things than poor Brick. Mike and Frankie both have to attend a meeting with Brick's teacher every year about his quirkiness and attend his social group's meetings. Brick basically reads his life away and Mike and Brick never get to bond. Mike got Brick into football by having him read up on facts and find his favorite 3-syllable words. Brick began to like football and knows tons of facts. Mike told him that if he can talk sports than he can talk to any guy in the world. Mike and Brick watching football made Axl jealous. When Mike had his buddies from the quarry over to watch the game, Brick talked too much and made them leave one by one. When Brick used his Father's Day coupons he made for Mike he bothered Mike his whole vacation until Mike told Brick to leave him alone.

Axl Heck is generally a terrible older brother towards Brick by being mentioned to do things like fart on his face or anything else.

Sue Heck and Brick have a good bond when they have to help each other such as figuring out how to cover up the hole in Sue's wall twice, or Sue trying to sound like Frankie on the phone calling Kevin's parents to say that Brick can't attend his son's birthday party which he constantly messes up at. When Axl had to look after a baby doll for his school homework, he wasn't very good at it and the baby doll was crying constantly. Brick moved into Sue's bedroom for a bit as he could not sleep with all the crying. Sue and Brick decided to keep throwing objects at Sue's wall next to Axl's room to cause the baby to keep crying to wind Axl up. But their fun turned into a nightmare when a the wall started to crack and end up becoming a huge hole in the wall. They covered up the hole with Sue's posters, but Sue confessed in a later episode in season 2 when Mike came to punish Sue for going to see an adult film with Carly, (which Sue already felt bad about and kept pleading to be punished more). In season 3 Mike's friend and Co-Worker Dave fixed the hole in the wall for the Hecks. But in season 4 when Sue and Brick bought an old vault from an antiques shop hoping there would be a ton of money inside. This caused them to create another giant hole in the wall. It is unknown when the wall got fixed again. Another big hole in the wall was created again in Season 8 when Brick and Sue were fighting over Sue's room. Sue had allowed Brick to stay in her room over the summer while she was in Dollywood, but Brick wouldn't move back out after the summer. Sue locked herself in her room and Brick (who was dressed as a bowling pin for Halloween) broke through the wall where the hole is always created, and created another huge hole. Mike told everyone to go back into everyone's original bedrooms.

When Axl and Sue fight in church and Mike accidentally whips a book at an old lady's head aiming for Axl, they were called in to have a talk with the new reverend who says that he can have one on ones with people. Just about ready to go Brick admits that he feels invisible which leads Brick to having a one on one. Reverend brings them back in and when Brick's supposed to tell them what he told him he claims he would rather have wintergreen toothpaste which the family agrees to do. On top of that they were starving and ready to go out to eat at King Arthur's. Almost always innocent Sue admits that she got drunk and she twerked at a party which led to Sue having a one on one with the reverend. Frankie pulls a peppermint out of her purse when Brick asks aren't the parents supposed to sacrifice for their kids. Frankie slides it across the floor and Brick tries it and hates it and Frankie states that it's wintergreen. Brick realises he doesn't like wintergreen. 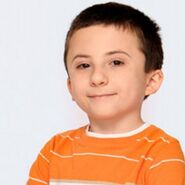 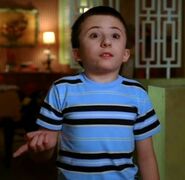 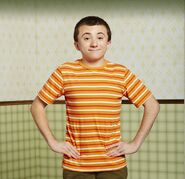 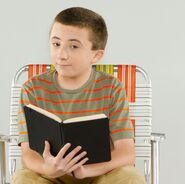