Start a Wiki
Bridger and Brecken Palmer , born November 24, 1998 are American twin actors. They played Otto "Otter" (Bridger) and Ely (Brecken) Beardsley in the movie Yours, Mine and Ours . They started acting when they were 4 years old, in their sister Jaelin's footsteps.

The brothers have also been featured in that section of Desperate Housewives , Color and Light . Bridger played PJ Harper and Brecken played Jimmy Harper. Bridger and Brecken played the actors for Zack (Brecken) and Cody (Bridger) in the first part of The Suite Life Goes Hollywood section of The Suite Life of Zack and Cody . It premiered on April 20 in the United States . Bridger has also played small roles in Cuts , Bones and The Closer , without his brother.

Bridger and Brecken are two-egg twins , even though they always play one-egg twins in movies and TV shows. They are 6 minutes apart and Bridger is the oldest. The twins both have medium-length, blonde hair. Bridger has brown eyes, while Brecken has blue.

They have two sisters. McKenna Palmer and Jaelin Palmer. Jaelin had a small role as a bully in Yours, Mine and Ours , and she also played "The Cracker" in the Hannah Montanaepisode of School Bully .

Bridger and Brecken were nominated in the Young Artist Award 2006, for their contributions to Yours, Mine and Ours . They shared the nomination with the other child actors in the film. 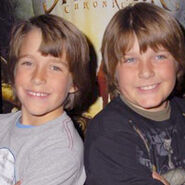 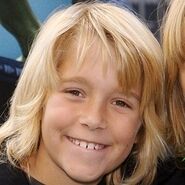 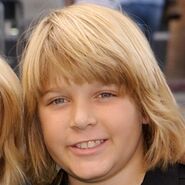 Add a photo to this gallery
Retrieved from "https://parody.fandom.com/wiki/Bridger_and_Brecken_Palmer?oldid=1620018"
Community content is available under CC-BY-SA unless otherwise noted.