The Parody Wiki
Register
Don't have an account?
Sign In
Advertisement
in: Characters, Animals, European Animals,
and 10 more

The British primitive goat is a landrace of domestic goat native to Great Britain and Ireland, and is the original goat of the region. It is considered a rare breed, existing as several, isolated feral herds, as some captive populations in zoological parks and nature reserves, and breeding stock on some private farms operated by groups of rare-breed enthusiasts. As few as 1,200 individual British primitives may remain. The variety is also referred to as the British native goat, the old British goat, or the British landrace goat, among more specific names (English, Irish, Scottish or Scotch, and Welsh primitive or landrace goat, and old English, etc., goat). It descends from the earliest goats brought to the region in the Neolithic era, around 3,000 BCE. It is classified in the Northern breed group of goats. A population in Northumbria is sometimes referred to as the Cheviot goat. The British primitive is among the foundation stock of some modern standardised breeds, including the Anglo-Nubian goat. The breed is comparatively small, with commensurately low milk production. It is hardy and wiry haired, adapted to rough terrain and weather, and able to subsist and breed on its own without human intervention. 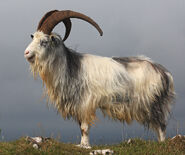 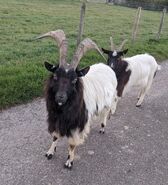