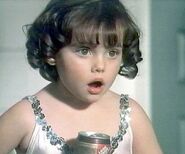 With this photo, I want to note the fact that apparently, Bug Hall and Travis Tedford became close friends with Blake Jeremy Collins (Woim). That's kind of interesting, in my eyes.

I think Brittany Ashton Holmes looks adorable in those overalls.

Add a photo to this gallery
Retrieved from "https://parody.fandom.com/wiki/Brittany_Ashton_Holmes?oldid=1733214"
Community content is available under CC-BY-SA unless otherwise noted.