Brontotherium ("large-horned face"), also known as Megaceratops, Brontops, or Menodus, is an extinct genus of the prehistoric odd-toed ungulate (hoofed mammal) family Brontotheriidae, an extinct group of rhinoceros-like browsers related to horses. It was endemic to North America during the Late Eocene epoch (38–33.9 mya), existing for approximately 4.1 million years. All of the species had a pair of blunt horns on their snout (the size varying between species), with the horns of males being much larger than those of the females. This could indicate that they were social animals which butted heads for breeding privileges. 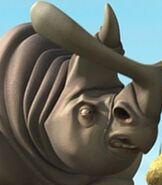 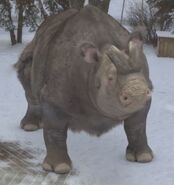 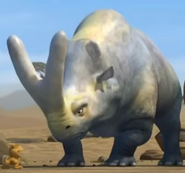