The brown falcon (Falco berigora) is a relatively large falcon native to Australia and New Guinea.

A number of plumage morphs exists, with the primary distinction being between the pale morph and the dark morph. Both morphs usually have dark brown upper parts and wing coverts. Dark morph birds have predominantly dark under parts, although some light streaking is common. Pale morph birds have white under parts that are varyingly streaked with brown, sometimes heavily so. Pale individuals may also have prominently white under tail coverts and these may be diagnostic. 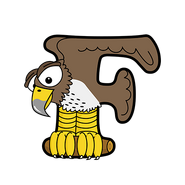 Add a photo to this gallery
Retrieved from "https://parody.fandom.com/wiki/Brown_Falcon?oldid=1674634"
Community content is available under CC-BY-SA unless otherwise noted.