The Parody Wiki
Register
Don't have an account?
Sign In
Advertisement
in: The Junkyard Gang, Main Characters, Characters,
and 7 more

Bucky stuck mostly to the background. But was always shown to be a pretty friendly, easy to get along with guy.

As his name suggests, he has a large overbite with buck teeth.

He wears a yellow t-shirt, green pants, and yellow sneakers. His hair is cut in the shape of a bowl.

In the film, his appearance is mostly unchanged, but his sneakers are now yellow and white. 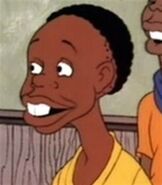