Buena Girl (known as ​Super Niña​ in the pilot) is a 10-year-old and the most knowledgeable among the Three Mascaritas, and she is usually the one who helps Rikochet and the Flea out of their situations. In Lucha School, she was 9 years old. In season 2, she was 11 years old. And in season 3, she was 12 years old. She is somewhat strict on rules, which causes friction between her and her friends. She brushes her teeth eight times a day.  Her signature move is the "Buena Bulldozer Of Truth", where she transforms into a bulldozer and bulldozes her opponent. She claims to be a descendant of the Slamazons, an ancient tribe of female masked wrestlers (play on the Amazons). Normally, Buena Girl remarks "It's not right!", when something goes against the Code of Masked Wrestling or anything outside the rules. She also alternates the Spanish word buena in place of its English counterpart word good in some sentences. Her parents are "Buena Mom" and "Buena Dad". It is also hinted that she may have a secret crush on Rikochet and secret creepy obsession with the Flea. She was voiced by Kimberly Brooks. 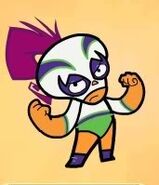 Buena Girl as a bulldozer. 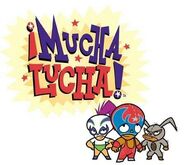 Retrieved from "https://parody.fandom.com/wiki/Buena_Girl?oldid=2094957"
Community content is available under CC-BY-SA unless otherwise noted.