The Parody Wiki
Register
Don't have an account?
Sign In
Advertisement
in: Characters, Animals, Domestic Animals,
and 20 more

Bulldogs have a longstanding association with British culture, as the BBC wrote: "to many the Bulldog is a national icon, symbolising pluck and determination." During World War II, Bulldogs were often likened to Prime Minister Winston Churchill and his defiance of Nazi Germany. When the English settled in the Americas, their Bulldogs came with them. A few dedicated bulldog fanciers formed the Bulldog Club of America in 1890 and it was incorporated under the laws of the State of New York on November 29, 1904. 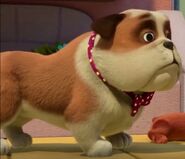