Bullet is a character from the animated series The Powerpuff Girls.

Bullet looks like any other squirrel in Townsville, being born to a normal family of squirrels. Bullet looks exactly like her siblings that are briefly shown at the beginning of the show, with brown fur and large orange eyes, though Bullet's eyes are meant to look like the other Powerpuff Girls.

In the episode "Stray Bullet," the girls briefly added another fourth member, an injured squirrel who Bubbles had given Chemical X, whom they named "Bullet." The Powerpuff Girls first meet Bullet when Bubbles rescued Bullet from a hawk and takes the squirrel home. During the night, Bubbles feeds the squirrel drops of Chemical X in hopes that help the squirrel heal faster, which soon leads to Bullet developing powers similar to the Powerpuff Girls'. The girls officially adopt Bullet as a Powerpuff. However, Bullet feels that she must protect her animal friends and decides to go back to the woods.

Bullet still resides in the forests outside Townsville, where she protects the animal community, but she returns to help the Powerpuff Girls from time to time. The only other time Bullet appears in the series, however, is in "The City of Nutsville." When Bubbles gets stung in the throat by a bee and is unable to speak, she calls on Bullet to help her when angry squirrels swarm the city and she is unable to communicate with them. They eventually figure out that the squirrels were trying to retrieve their acorns, which were buried under the Mayor's newly-planted statue. Bubbles and Bullet destroy the statue, and sometime later, a new statue of the duo is placed in honor of all the squirrels in Townsville. 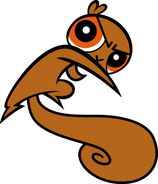 Retrieved from "https://parody.fandom.com/wiki/Bullet?oldid=2111867"
Community content is available under CC-BY-SA unless otherwise noted.