The burrowing owl (Athene cunicularia) is a small, long-legged owl found throughout open landscapes of North and South America. Burrowing owls can be found in grasslands, rangelands, agricultural areas, deserts, or any other open dry area with low vegetation. They nest and roost in burrows, such as those excavated by prairie dogs (Cynomys spp.). Unlike most owls, burrowing owls are often active during the day, although they tend to avoid the midday heat. Like many other kinds of owls, though, burrowing owls do most of their hunting from dusk until dawn, when they can use their night vision and hearing to their advantage. Living in open grasslands as opposed to forests, the burrowing owl has developed longer legs that enable it to sprint, as well as fly, when hunting. Before European colonization, burrowing owls probably inhabited every suitable area of the New World, but in North America, they have experienced some restrictions in distribution since then. In parts of South America, they are expanding their range with deforestation. The western burrowing owls (A. c. hypugaea) are most common in the Rocky Mountain Arsenal National Wildlife Refuge and in several counties in Colorado and their population is reportedly threatened. Burrowing owls range from the southern portions of the western Canadian provinces through southern Mexico and western Central America. They are also found in Florida and many Caribbean islands. In South America, they are patchy in the northwest and through the Andes, but widely distributed from southern Brazil to Patagonia and Tierra del Fuego. Burrowing owls are year-round residents in most of their range. Birds that breed in Canada and the northern U.S. usually migrate south to Mexico and the southern U.S. during winter months. Burrowing owls have bright eyes; their beaks can be dark yellow or gray depending on the subspecies. They lack ear tufts and have a flattened facial disc. The owls have prominent white eyebrows and a white "chin" patch which they expand and display during certain behaviors, such as a bobbing of the head when agitated. Adults have brown heads and wings with white spotting. The chest and abdomen are white with variable brown spotting or barring, also depending on the subspecies. Juvenile owls are similar in appearance, but they lack most of the white spotting above and brown barring below. The juveniles have a buff bar across the upper wing and their breast may be buff-colored rather than white. Burrowing owls of all ages have grayish legs longer than those of other owls. Males and females are similar in size and appearance, and display little sexual dimorphism. Females tend to be heavier, but males tend to have longer linear measurements (wing length, tail length, etc.). Adult males appear lighter in color than females because they spend more time outside the burrow during daylight, and their feathers become "sun-bleached". The burrowing owl measures 19–28 cm (7.5–11.0 in) long and spans 50.8–61 cm (20.0–24.0 in) across the wings, and weighs 140–240 g (4.9–8.5 oz). As a size comparison, an average adult is slightly larger than an American robin (Turdus migratorius). 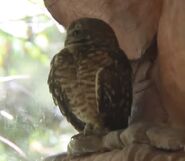