The California grizzly (Ursus arctos californicus) is an extinct population of the grizzly, the very large North American brown bear. "Grizzly" could have meant "grizzled"; that is, golden and grey tips of the hair or "fear-inspiring". Nonetheless, after careful study, naturalist George Ord formally classified it in 1815 – not for its hair, but for its character – as Ursus horribilis ("terrifying bear"). Genetically, North American grizzlies are closely related; in size and coloring, the California grizzly was much like the grizzly of the southern coast of Alaska. In California, it was particularly admired for its beauty, size, and strength. The grizzly became a symbol of the Bear Flag Republic, a moniker that was attached to the short-lived attempt by a group of American settlers to break away from Mexico in 1846. Later, this rebel flag became the basis for the state flag of California, and then California was known as the "Bear State." In 1866, a grizzly weighing 2,200 pounds (1,000 kg) was killed in Valley Center, California, the biggest bear ever found in California, as described in 1932 by a witness who was six years old at the time. California still has habitat for about 500 grizzlies, and if the North Cascade population recovers and expands, it may be introduced to California. There are, however, only about 20 of these bears remaining in that ecosystem. In 2014 the US Fish and Wildlife Service received a petition to reintroduce the grizzly to California. This reintroduction would be from the very closely related Rocky Mountain grizzly. 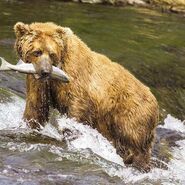 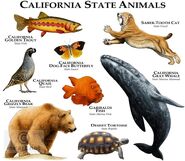