The California newt or orange-bellied newt (Taricha torosa), is a species of newt endemic to California, in the Western United States. Its adult length can range from 5 to 8 in. Its skin produces a potent toxin. California newts reside in the coastal counties of California and in the southern Sierra Nevada and occupy a diverse array of habitats found near the small ponds and creeks where they breed, including woodlands and chaparral. Newts are amphibians. They are salamanders in the subfamily called Pleurodelinae. The California newt has warty, slate-gray skin on its back and bright orange-yellow skin underneath. It is very similar in appearance to the rough-skinned newt and they are often indistinguishable without dissection, but in general, the California newt has orange skin around the bottom of its eye while the Rough-skinned has gray skin at the bottom of its eye. The California newt also has eyes that protrude beyond the edge of the jaw line when viewed from above, while the eyes of the rough-skinned do not protrude, giving its head a more bullet-like appearance. The red-bellied newt is also similar but has dark irises vs. yellow in the California newt, more red coloration underneath, and a dark band across the vent that is lacking in the California newt. Newts are amphibians. They are related to salamanders (in a subfamily called Pleurodelinae). They live in North America, Europe and Asia. Their skin tends to be rougher than the skin of salamanders. 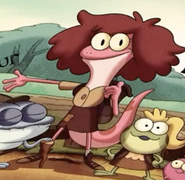