The Cape lion (Panthera leo melanochaita) is an extinct subspecies of lion with a former population of Southern African lions, as in Southeast (Panthera leo krugeri) or Southwest African lions (Panthera leo bleyenberghi). As with the Barbary lion, several people and institutions claim to have Cape lions. There is much confusion between Cape lions and other dark-coloured long-maned captive lions. Dark-maned lions in captivity today have been bred and cross-bred from lions captured in Africa long ago, with examples from all of these ‘subspecies’. Mixed together, hybridized, most of today's captive lions have a ‘soup’ of alleles from many different lion subspecies. 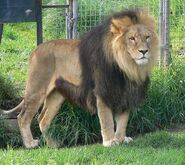 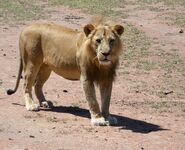