Captain Caveman is a character created by Hanna-Barbera for the Captain Caveman and the Teen Angels segments of Scooby's All-Star Laff-a-Lympics. His design was based loosely on that of Rock Slag and Gravel Slag from Wacky Races. Mel Blanc provided the character's voice. Jim Cummings also voiced Captain Caveman in Scooby-Doo! Mystery Incorporated. Tracy Morgan is set to voice the character in the upcoming film, Scoob!

After being thawed out by the Teen Angels, "Cavey" helped them solve supernatural mysteries, in the Scooby-Doo style. Cavey had super strength, kept live dinosaurs in his fur, and carried a club which enabled him to fly, among its other functions. 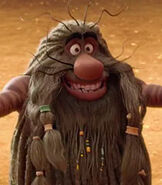