The Parody Wiki
Register
Don't have an account?
Sign In
Advertisement
in: Characters, Animals, Ocean Animals,
and 10 more

The Caribbean hermit crab, Coenobita clypeatus, also known as the soldier crab, the West Atlantic crab, the tree crab, and the purple pincher (due to the distinctive purple claw), is a species of land hermit crab native to the west Atlantic, Bahamas, Belize, southern Florida, Venezuela, the Virgin Islands, and the West Indies. Adults burrow and hide under the roots of large trees, and can be found a considerable distance inland. As with other terrestrial crabs, they utilize modified gills to breathe air. Their shell helps maintain the humidity necessary for gas exchange to function.

Caribbean hermit crabs are both herbivorous and scavengers. In the wild, C. clypeatus feeds on animal and plant remains, overripe fruit, and feces of other animals, including the Mona ground iguana, Cyclura stejnegeri. The West Indian top snail (Cittarium pica) shell is often used for its home, and the hermit crab can use its larger claw to cover the aperture of the shell for protection against predators. As with other species of hermit crabs, C. clypeatus may engage in "shell fights" and can emit a chirping noise when stressed. Typically, the Caribbean hermit crab's left claw is larger in size than its right claw and is purple in color. Female land hermit crabs release fertilized eggs into the ocean. The spawning (called "washing" in the English-speaking Caribbean) occurs on certain nights, usually around August.

This species is one of the two land hermit crabs commonly sold in the United States as a pet, the other being the Ecuadorian hermit crab. C. clypeatus has been confirmed to live as long as 12 years, and some crab owners have claimed to have crabs live up to 40 years. 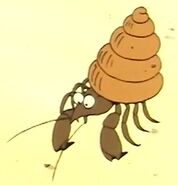 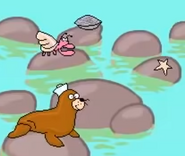 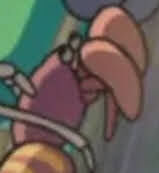