The Parody Wiki
Register
Don't have an account?
Sign In
Advertisement
in: Characters, Villains, Spider-Man Characters,
and 13 more

Carnage is a fictional supervillain appearing in American comic books published by Marvel Comics. The character first appeared in The Amazing Spider-Man #360. Carnage was created by writer David Michelinie and artist Mark Bagley. The character belongs to a race of amorphous extraterrestrial parasites known as the Symbiotes. He is usually depicted as an adversary to Spider-Man, as well as serving as the archenemy of Venom. The symbiote has taken many hosts. The original and most notable host from Earth-616 is Cletus Kasady, a serial killer from the Marvel Universe. Norman Osborn and his grandson Normie Osborn have also used the symbiote and have been referred to as the Red Goblin. 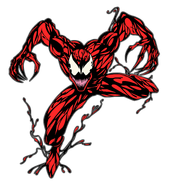