The Parody Wiki
Register
Don't have an account?
Sign In
Advertisement
in: Characters, Supporting Characters, Female,
and 24 more

Carrie Krueger is a supporting character in The Amazing World of Gumball. She is a ghost who is in Miss Simian's class at Elmore Junior High. Her first appearance was a cameo in "The Third" and her first major appearance was in "The Ghost." It is revealed in "The Mirror," that a man named the Snatcher (formerly known as Vladus Lokowitchki) is her father. As of "The Matchmaker," Carrie is dating Darwin.

In season 1, Carrie is a white, translucent ghost with a ghostly tail in place of her legs and a hairclip that resembles a skull with wings. Her arms rest in front of her body and her hair covers her left eye, though sometimes it will swing over to her right. She also has magenta and cyan lining around her, making her seem like a 3D anaglyph image. When her teeth are visible, they are shown to be sharp and pointed. She normally has black eyebrows.

In season 2, Carrie's appearance is slightly changed due to the change in the show's animation style. Her head becomes slightly more rectangular, and she now has a shoulder on each side of her body, which her arms now hang from. She also becomes a darker color, and her outline gets thicker, like the other 2D characters on the show with outlines.

Carrie is a stereotypical "emo" who enjoys being miserable (although she considered and once referred to herself as a 'punk rock chick' in "The Pony"). Unlike most emo kids, who usually only hang out with other emos, Carrie is a social floater who will talk to anyone, possibly because Elmore Junior High lacks other emos. She regularly interacts with the other girls and usually participates in Gumball and the rest of the class' antics.

In "The Ghost," she claims pain is the only emotion she can feel. Despite this, she has shown other emotions and has been seen smiling on occasion. In "Halloween," Carrie blushes when Darwin kisses her, a sign of feeling love. She is capable of compassion, as she seemed genuinely concerned for Gumball and Darwin's safety. At the end of the episode, she was visibly upset when she thought they had been trapped in the underworld.

In "The Pony," a softer side of her was shown when she saw A Pony's Tail by mistake and admitted that she found it touching. It would seem that at heart, she is also ultimately very selfless, as indicated in "The Scam," when she was willing to stay with Gargaroth forever if it meant saving her friends and the school. Another example of this is shown in the episode "Halloween" where she was willing to sacrifice herself for Gumball and Darwin to advance in saving their sister. She also appeared to be quite shy when interacting with Darwin, whom she had developed a crush on, as she was unable to ask him if she could borrow his body and if he wanted to do something together without blushing hugely or sounding sheepish and nervous. However, in "The Matchmaker," she has somewhat overcome that trait, as she has become more honest about her feelings for him and the two eventually start dating each other.

Carrie can enter a person's body, possessing them. This forces the person to do whatever Carrie wants to do. However, the victim may be able to retain some degree of control, as seen in "The Ghost" when Gumball struggles with himself.  She can levitate objects, turn invisible, phase through solid matter, and teleport. She can also use magic spells by speaking in Latin. Most of these powers are demonstrated in "The Scam," though her teleporting ability seems to be slightly inaccurate in "Halloween."

She can also be summoned by a person by calling her name three or five times, as seen in "The Mirror" and "The Matchmaker." In "The Ghouls," it is revealed that she can bring others along with her when she teleports.

"The Matchmaker" has also shown her to be skilled at making potions—love potions, for example.

Carrie can move things telekinetically, as demonstrated in "The Scam."

Carrie can open up portals, such as when she did in "The Scam." 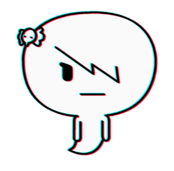 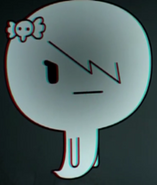 An older version of Carrie (Above an older Leslie). As you can see, her shape is "fat" and bares a slight resemblance to Big Boo from the Mario series. She does not have any accessories like she does in the actual show. 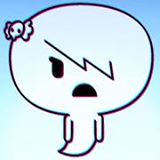 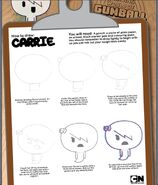 How to draw Carrie 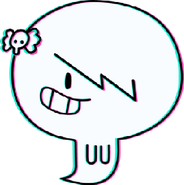 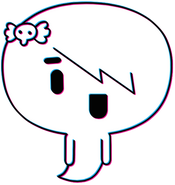 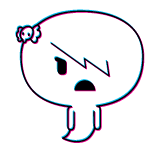 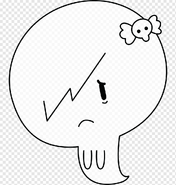