The Parody Wiki
Register
Don't have an account?
Sign In
Advertisement
in: Characters, Animals, European Animals,
and 35 more

The carrion crow (Corvus corone) was, until recently, considered to be a race of the same species as the hooded crow (Corvus cornix), but it is now recognised as a separate species. It is the same size and shape as the hooded crow, but differs in that the plumage is entirely black, with a green and bluish-purplish gloss. The thick black bill has a curved tip. Vocalisations are croaky and harsh, and somewhat 'harder' than those of the hooded crow; the name 'crow' is imitative of their calls. 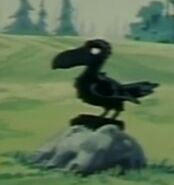