The Caspian tiger (Panthera tigris virgata), also known as the Hyrcanian tiger, the Mazandaran tiger, the Persian tiger, Mongolian tiger, and the Turanian tiger, is thought to be an extinct tiger subspecies that had been recorded in the wild before the end of the 20th century, and formerly inhabited the sparse forest habitats and riverine corridors west and south of the Caspian Sea, from Turkey, Iran and east through Central Asia into the Takla Makan desert of Xinjiang, China. 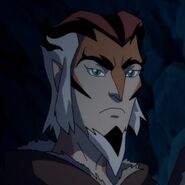