Cat is one of the two protagonists in CatDog.

He is voiced by Jim Cummings.

Cat is the smarter, more clever, and more cunning of the two. He often devises evil plans to trick Dog into getting what he wants, such as making Dog smarter in an attempt to have more in common with him, or having him win a dog sledding contest by training him in a very hard and militaristic manner, and usually, as a result of his greediness and selfishness, these schemes all blow up in his face. He is the "underdog" of the two. Life has been hard for the both of them, as they have been shunned by society due to their awkward appearance, but Cat always seems to get the short end of the stick in the situations, especially faced with the Greaser Dogs. He doesn't like garbage trucks and balls. With his brains and constant ridiculing from the rest of the characters, he is the more defensive and short tempered of the two. Despite his quirks and spats with Dog, he loves his brother with his whole heart. He cares so deeply that he ends up helping Dog in the end once his guilty conscience gets to him. Cat has a "Crush" on Shriek. In one episode, Cat admits his love for Shriek and kisses her after Shriek kisses Dog and tells him she loves him (Only to wind up getting pounded by the aggressive poodle). Cat desires fame and fortune and tends to go to excessive lengths in order to gain them. He is intelligent and enjoys reading, gardening, and listening to classical music. Cat is somewhat uptight and believes strongly in being polite, eating healthy, organized, and clean. When Lola moved to Nearburg Cat was seen trying to eat a muffin and a donut. He is a stickler for rules and, like most cats, is aquaphobic. He is also obsessed with jet skis, once stating that he would sell his soul for one. Cat is 26 years old and has the blood type A+. Despite his sophisticated personality, Cat also has a dark side which is seen lots of times. Whenever he snaps, Cat becomes a ruthless, psychopathic maniac who even the Greasers are scared of once they see what he is capable of doing (especially his stress-induced, superhuman strength, evident when he destroy the Greasers' monster truck with a single punch). Cat's catchphrase is "TERRIFIC," said in a negative tone. He usually says this when something bad happens. Dairy gives Cat gas. Cat and Dog are finally reunited with their parents in CatDog and the Great Parent Mystery.

Cat is a golden-brown cat with spots. He has an oval red nose, triangular ears, three freckles on each cheek, and whiskers. He doesn't have a full body because he is conjoined with his brother Dog and can't be separated without him and Dog being together, which is hard at times when they want to be in a different direction, they fight.

This is a gallery of Cat. Please do not post fan arts or inappropriate images. 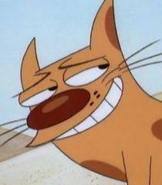 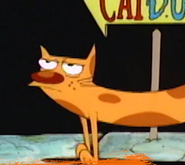 Add a photo to this gallery
Retrieved from "https://parody.fandom.com/wiki/Cat_(CatDog)?oldid=2089315"
Community content is available under CC-BY-SA unless otherwise noted.