Catherine is a character of the television show, Pepe Le Pew and Penelope Pussycat: The Romantic Adventures. She appears in Rosemary Hills, making her debut in Romantic for Fantastic.

Her personality is pretty, beautiful, sexy, super strong, hothead, short-tempered, fast, and nice. She also has a running gag to carry people in her arms when they need help. 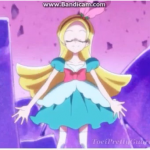