The Parody Wiki
Register
Don't have an account?
Sign In
Advertisement
in: Characters, Animals, Extinct Animals,
and 15 more

The cave hyena (Crocuta crocuta spelaea), also known as the Ice Age spotted hyena, was a paleosubspecies of spotted hyena which ranged from the Iberian Peninsula to eastern Siberia. It is one of the best known mammals of the Ice Age, and is well represented in many European bone caves. The cave hyena was a highly specialised animal, with its progressive and regressive features being more developed than in its modern African relative. It preyed on large mammals (primarily wild horses, steppe wisent and woolly rhinoceros), and was responsible for the accumulation of hundreds of large Pleistocene mammal bones in areas including horizontal caves, sinkholes, mud pits and muddy areas along rivers. 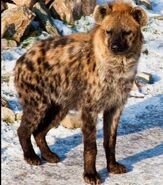