Celery Propulsion is Jet's mom and a main character in the series, Ready Jet Go!. She is voiced by Meg Roe.

Mr. and Mrs. Propulsion (who go by “typical Earth names” Carrot and Celery) work as intergalactic travel writers, and are on Earth for a long stay, from which they intend to file many travel stories.

Like Jet and all Bortronians, they’re cheerful and fearless, and know almost nothing about Earth social norms.

As Bortronian travel writers, they follow the Prime Directive: “don’t freak out the locals.” They also tell Jet to “leave your campsite cleaner than when you found it.”

However well-intentioned, though, they tend to forget to keep their alien identity a secret and keep telling people that they are from Bortron 7.

Carrot and Celery tend to talk in a rather eccentric English, since they just downloaded it when they arrived on Earth. They mix up their metaphors and are always freshly learning Earth habits like shopping for food, taking care of the house, and “mowing the roof.”

When she and her brother Zucchini were younger, they would have races and compete with each other at many things. Later on, she married Carrot and had Jet, and they then relocated to Earth. 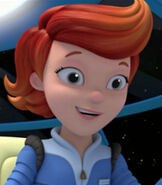