The Parody Wiki
Register
Don't have an account?
Sign In
Advertisement
in: Characters, Creatures, Mythical Creatures,
and 28 more

The centaur, or occasionally hippocentaur, is a mythological creature with the upper body of a human and the lower body of a horse. The centaurs were usually said to have been born of Ixion and Nephele (the cloud made in the image of Hera). Another version, however, makes them children of a certain Centaurus, who mated with the Magnesian mares. This Centaurus was either himself the son of Ixion and Nephele (inserting an additional generation) or of Apollo and Stilbe, daughter of the river god Peneus. In the later version of the story his twin brother was Lapithes, ancestor of the Lapiths, thus making the two warring peoples cousins. Centaurs were said to have inhabited the region of Magnesia and Mount Pelion in Thessaly, the Foloi oak forest in Elis, and the Malean peninsula in southern Laconia. Another tribe of centaurs was said to have lived on Cyprus. According to Nonnus, they were fathered by Zeus, who, in frustration after Aphrodite had eluded him, spilled his seed on the ground of that land. Unlike those of mainland Greece, the Cyprian centaurs were horned. There were also the Lamian Pheres, twelve rustic daimones of the Lamos river. They were set by Zeus to guard the infant Dionysos, protecting him from the machinations of Hera but the enraged goddess transformed them into ox-horned Centaurs. The Lamian Pheres later accompanied Dionysos in his campaign against the Indians. Centaurs subsequently featured in Roman mythology, and were familiar figures in the medieval bestiary. They remain a staple of modern fantastic literature. The centaur's half-human, half-horse composition has led many writers to treat them as liminal beings, caught between the two natures, embodied in contrasted myths, both as the embodiment of untamed nature, as in their battle with the Lapiths (their kin), or conversely as teachers, like Chiron. One notable apperance of the centaur is Colt Bronco from Onward. 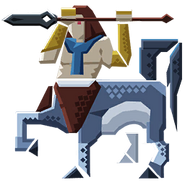 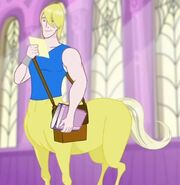 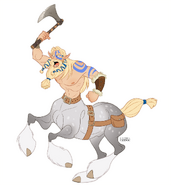 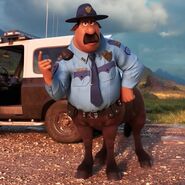 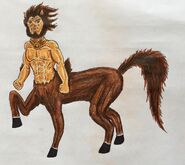 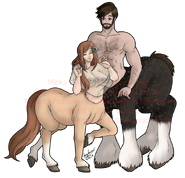