The Parody Wiki
Register
Don't have an account?
Sign In
in: Characters, Animals, Extinct Animals,
and 40 more

Ceratosaurus, in reference to the horn on its nose, was a large predatory theropod dinosaur from the Late Jurassic Period (Kimmeridgian to Tithonian), found in the Morrison Formation of North America, and the Lourinhã Formation of Portugal (and possibly the Tendaguru Formation in Tanzania). It was characterized by large jaws with blade-like teeth, a large, blade-like horn on the snout and a pair of hornlets over the eyes. The forelimbs were powerfully built but very short. The bones of the sacrum were fused (synsacrum) and the pelvic bones were fused together and to this structure (i.e. similar to modern birds). A row of small osteoderms was present down the middle of the back. 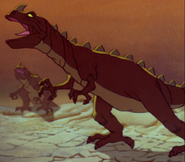 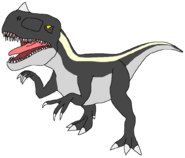