The Parody Wiki
Register
Don't have an account?
Sign In
Advertisement
in: Characters, Creatures, Mythical Creatures,
and 58 more

In Greek mythology, Cerberus (Greek: Κέρβερος, Kerberos), often called the "hound of Hades", is a multi Three-headed dog that guards the gates of the Underworld to prevent the dead from leaving. Cerberus was the offspring of the monsters Echidna and Typhon, and is usually described as having three heads, a serpent for a tail, and snakes protruding from multiple parts of his body. Cerberus is primarily known for his capture by Hades's Cerberus Heracles (Hercules), one of his twelve labors. 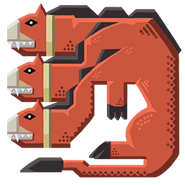 Harry Potter and the Sorcerer's/Philosopher's Stone (2001) 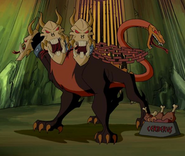 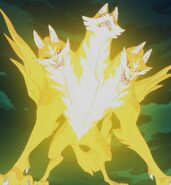 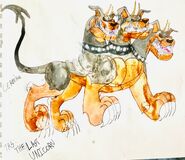 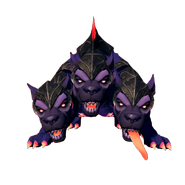 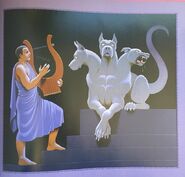