The Chacoan peccary (Catagonus wagneri) was first described from subfossil remains collected in the 1930’s, but was not recognised as a living species until 1975, making it one of the most recently discovered large mammals. It is the largest of the three species of peccary, and has many pig-like features. It is an ungulate with brownish grey bristle-like fur, a dark stripe running across the back, and white fur on the shoulders. This species differs from other peccaries by having longer ears, tail and snout, and has white hairs around the mouth. It also possesses a third hind toe, while other peccaries only have two hind toes. Males and females are similar in appearance. 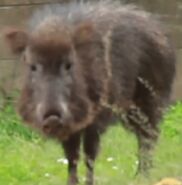 Add a photo to this gallery
Retrieved from "https://parody.fandom.com/wiki/Chacoan_Peccary?oldid=2374290"
Community content is available under CC-BY-SA unless otherwise noted.