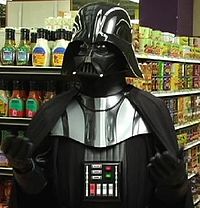 Chad Vader (Aaron Yonda/voiced by Matt Sloan) is the show's central character. He is the day shift manager of Empire Market. Sometimes using lines lifted from the Star Wars films (the main source of humor being Chad going about day-to-day life while retaining a behavior befitting of a Sith lord), Chad's main goal is to crush Empire Market's competition and help make the store dominate the food retailing industry. However, as Season 2 progresses along, Chad follows Randy's orders to "ditch" the Star Wars attitude and become more normal. The new leader announces that everyone has a chance to be General Manager. His main goal morphs into a great ambition to become General Manager (which he succeeds in doing the end of Season 3). While he has inappropriate and rocky relationships with most of his co-workers, most notably Clint Shermer, he has better ones with others, such as Jeremy, whom he adopts as his apprentice. Chad implies in the second episode that he is Darth Vader's younger, less successful brother, and that Darth gave Chad a life support suit and helmet similar to his own after Chad accidentally rode his bicycle into a volcano. This fact is mentioned explicitly on the Blame Society website (www.blamesociety.net). Though he uses a red Sith lightsaber as a weapon to threaten opponents and shoplifters, he may not be a Sith; he is never referred to as "Darth", the title given to all members of the Sith order. He is, however, referred to as "Lord Vader" by some characters. Chad had lost touch with his family when they moved to Tatooine without him. LucasArts was impressed by Sloan, and this led to him becoming the new voice actor for Darth Vader. His voice appears in the games Empire at War: Forces of Corruption, Soulcalibur IV, and Star Wars: The Force Unleashed. It is also noted that in Star Wars: The Force Unleashed, if the player kills 12 Stormtroopers as Darth Vader during the introduction sequence, they will receive an achievement called "Worst Day Shift Manager Ever".

Retrieved from "https://parody.fandom.com/wiki/Chad_Vader?oldid=1961079"
Community content is available under CC-BY-SA unless otherwise noted.