The Parody Wiki
Register
Don't have an account?
Sign In
Advertisement
in: Characters, Animals, African Animals,
and 12 more

The Chapman's zebra (Equus quagga chapmani) is a subspecies of the plains zebra. They, like their relatives, are native to the savannah of north-east South Africa, north to Zimbabwe, west into Botswana, the Caprivi Strip in Namibia, and southern Angola. The Chapman's zebra eats mainly grass and occasionally shrubs. They are currently at low risk status on the endangered species list, but like all other animals are at risk because of habitat destruction and illegal poaching. Chapman's zebra is distinguished by stripes similar to the Burchell's zebra and on the lower halves of the legs, which break up into many irregular brown spots. The pastern is not completely black on the lower half. When foals are born they have brown stripes and in some cases adults do not develop the black colouration in their fur and keep their brown stripes. Males usually weigh 270–360 kilograms (600–800 lb) pounds and stand at 120–130 cm (48–52 in) tall. Females approximately weigh 230–320 kilograms (500–700 lb) and stand as tall as the males. Chapman’s zebras live in herds of up to tens of thousands of individuals which are made up of family groups and bachelors. Adult zebras live in harems with permanent members; consisting of 1 herd stallion, 1 to 6 females and their offspring. The females stay in the same harems all their lives. Chapman’s zebras are non-territorial and in the wet season move over large areas, often associated with other ungulate species, but in the dry season will stay within a 10 km range of water. Chapman’s zebras do not breed seasonally, although a lot of births occur in the rainy season. One foal is born after 11–13 months, weighing 40–50 kg. The foals suckle for up to 12 months, but they are able to graze from 2 weeks old. 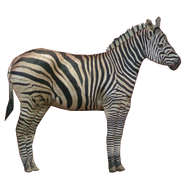