Charlene the Chipette is the very first Chipette and Brittany's prototype. She has blonde hair in a ponytail and blue eyes. Her signature colours are red and pink.

Charlene was the first character to be referred to as a (or rather "the") "Chipette". Not only this but the cover art says she is "of The Chipettes," indicating there is more than one. It is not known if this 1982 incarnation is the same as the 1983 incarnation more well known as The Chipettes (a trio of sisters) though.

She debuted 1982 on the Alvin and the Chipmunks' album The Chipmunks Go Hollywood. On this album, Alvin sings a duet with a female character billed as Charlene the Chipette. Charlene is featured on the song "You're The One That I Want" from the soundtrack of the motion picture Grease. Charlene was depicted on the album cover as having a blonde ponytail, potentially modelled after the character Sandy Olsson within the film.

She was the basis for the later character of Brittany. She and the other two members of The Chipettes were created in 1983, and the major differences are that Charlene has more detailed hair and was shown with a black nose.

She sang "You're The One That I Want" with Alvin in this album. She even had a small speaking role (voiced by Janice Karman, who later voiced The Chipettes). She had a slight Southern accent.

Rockin' Through the Decades

Some fans believe that Charlene appeared in "Surfin' Safari" and/or "Crocodile Rock" on the Rockin' Through the Decades special. Brittany has a similar appearance on the inside cover of the 1995 When You Wish Upon a Chipmunk album standing with her sisters, all of which are in fancy outfits. There was never any indication that it was Charlene in "Crocodile Rock," but it was never proven to be Brittany, either. The blonde Chipette's eyes are also a different shade of blue than Brittany's are. Regardless, it was never officially mentioned by Bagdasarian Productions which Chipette appeared in "Crocodile Rock", and the real answer may never be known.

Chipette with Alvin in "Crocodile Rock"

When You Wish Upon a Chipmunk art 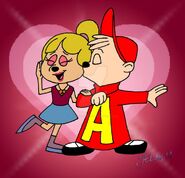 60's Alvin and Charlene
Add a photo to this gallery
Retrieved from "https://parody.fandom.com/wiki/Charlene_the_Chipette?oldid=1733314"
Community content is available under CC-BY-SA unless otherwise noted.