The Parody Wiki
Register
Don't have an account?
Sign In
Advertisement
in: Striped Characters, Yellow Characters, White Characters,
and 38 more

Charley is one of Emily Elizabeth's friends and a character from Clifford the Big Red Dog. He is voiced by: Gary LeRoi Gray.

Charley is also a very kind & easygoing. He is truly Jetta Handover's boyfriend, also Emily Elizabeth's best friend. He often has a tendency not to think before he acts at times. He is an excellent soccer player on the school soccer team, the Birdwell Birds. He lives on a houseboat with his father Samuel, who owns a Jamaican restaurant.

Charley is a 9 or 11-year-old Jamaican-American boy. He usually wears a white shirt with yellow stripes, red sneakers, and blue jeans. 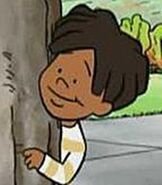