Charlie is the counsellor of Camp Happy Tales in Reader Rabbit Kindergarten and notifies Mat about Spike's theft of the essential items for the camping event. He also appears in Reader Rabbit 1st Grade as a stage hand for the theater. He then attends Sam's birthday party in Reader Rabbit Thinking Adventures Ages 4-6. 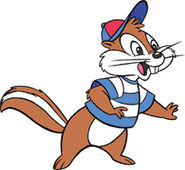