The Parody Wiki
Register
Don't have an account?
Sign In
Advertisement
in: Lalaloopsy Characters, Characters, Girls,
and 8 more

Charlotte Charades is Lalaloopsy Land's very own mime. She might be silent, but she sure has a lot to say when she uses gestures and mimes! She loves to play and walk her 'invisible' dog. Charlotte likes the colors black and white... but her favorite color is see-through! Charlotte is the older sister of little Sherri Charades. Her name was based off of a feminine name of French origin while declaring her knack of the silent guessing game.

Charlotte is a light skinned girl who wears pure white makeup on her face and has bright pink cheeks. Around her eyes she has extra markings to resemble eyelashes, which may or may not be mascara. Her hair is bright pink with straight-cut bangs and a couple of loose curly strands. She has a two-part cowlick at the top of her head. About shoulder length, her hair is worn around the sides and back of her head, flaring outward with each curl neatly worn. She also has black bows in her hair.

Charlotte, being a mime, has a basic black and white color scheme with red accessories.

Her most common attire is an elbow length striped shirt with peach ruffles along the ends of both sleeves. Her skirt is red tulle with magenta straps. She also has on white frilled-wrist gloves and black leggings tied below her knees with bows. Her socks are red, while her shoes are black Mary Janes with white bows at the toe.

Charlotte's pet is an invisible dog. While it cannot be seen, its shadow can be. To be safe it also wears a pink leash so that Charlotte herself can keep track of it.

Charlotte Charades lives in an invisible house. Its framework is thick and white, while the door and roof have red coloring. There are black and white stripes along the roof, windows, and awning. Around the house are multiple bread sticks and baguettes (french bread), with a small red Eiffel Tower is behind her home.

A button gray-scaled path can be seen going by her house and she has fancy heart shaped fencing framing her home. 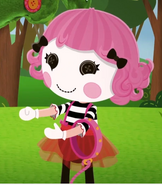