Pierre is a French grey raccoon who helps out in Reader and his friends' organized activities. As a cook, he wears a chef's hat, but when he's doing something else, he wears a beret. In the DVD movies, he is a brown raccoon. 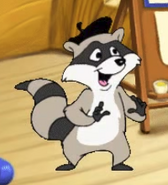 Pierre as an artist 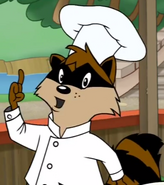