The Parody Wiki
Register
Don't have an account?
Sign In
Advertisement
in: Male Characters, Characters, Protagonists,
and 21 more

Chicken, (voiced by Charlie Adler), is one of the two main characters in Cow and Chicken Cow's 11 year old 5th Grade chicken brother. He can be mean to his younger sister, and even to the rest of the family. He Is In The Same 5th Grade Class as Flem And Earl. He has a powerful ego, but in spite of this, has a powerful conscience, usually only displayed when Cow is in danger, as well as being more intelligent (and sane) than most characters, and his selfish actions can actually come to others help. An example of all these can be found in the episode "Comet!", where Chicken was the only one who walked normally (the other characters followed the Red Guy by using their buttocks instead of their legs), and later Chicken tricked all the others in belief that a deadly comet was coming to smash them all and sold "Shields" (rather cheap gadgets) to them, but after he witnessed Cow's farewell to her toys, Chicken felt guilty and confessed the scam. However, when a real deadly (but small) comet arrived, Chicken's protections actually worked and he was forgiven for his prank.

His speech is riddled with malapropisms and sarcasm. Despite being a male, he demonstrated the ability to lay eggs. Like other chickens, he cannot fly, and is afraid of flying. Chicken is the only character in the show who knows that his sister and Supercow are the same person. Mostly Chicken calls Cow by the name stupid. Despite his name, Chicken resembles more of a rooster including a wattle.

Chicken as he appeared in Ben 10: Omniverse 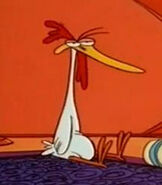 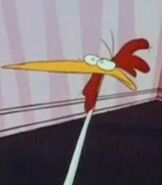 Chicken in What a Cartoon 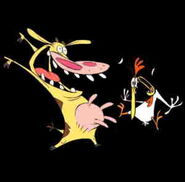 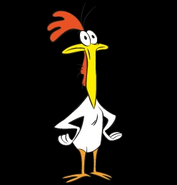