The Chincoteague Pony, also known as the Assateague horse, is a breed of horse that developed and lives in a feral condition on Assateague Island in the United States states of Virginia and Maryland. The breed was made famous by the Misty of Chincoteague series of novels written by Marguerite Henry starting in 1947. While phenotypically horse-like, they are commonly called "ponies". This is due in part to their smaller stature, created by the poor habitat on Assateague Island. Variation is found in their physical characteristics due to blood from different breeds being introduced at various points in their history. They can be any solid color, and are often found in pinto patterns, which are a favorite with breed enthusiasts. Island Chincoteagues live on a diet of salt marsh plants and brush. This poor-quality and often scarce food combined with uncontrolled inbreeding created a propensity for conformation faults in the Chincoteague before outside blood was added beginning in the early 20th century.

Several legends are told regarding the origins of the Chincoteague ponies, the most popular holds that they descend from survivors of wrecked Spanish galleons off the Virginia coast. It is more likely that they descend from stock released on the island by 17th-century colonists looking to escape livestock laws and taxes on the mainland. In 1835, the practice of pony penning began, with local residents rounding up ponies and removing some of them to the mainland. In 1924 the first official "Pony Penning Day" was held by the Chincoteague Volunteer Fire Company, where ponies were auctioned as a way to raise money for fire equipment. The annual event has continued in the same fashion almost uninterrupted to the present day.

Although popularly known as Chincoteague ponies, the feral ponies actually live on Assateague Island. The entire Island is owned by the federal government and is split by a fence at the Maryland/Virginia state line, with a herd of around 150 ponies living on each side of the fence. The herds live on land managed by two different federal agencies with very different management strategies. Ponies from the Maryland herd, referred to in literature of the National Park Service as Assateague horses, live within Assateague Island National Seashore. They are generally treated as wild animals, given no more or less assistance than other species on the island, other than to be treated with contraceptives to prevent overpopulation. Conversely, the Virginia herd, referred to as Chincoteague ponies, lives within the Chincoteague National Wildlife Refuge but is owned by the Chincoteague Volunteer Fire Company. The Virginia ponies are treated to twice yearly veterinary inspections, which prepare them for life among the general equine population, if they are sold at auction. While only around 300 ponies live on Assateague Island, around 1,000 more live off-island, having been purchased or bred by private breeders. 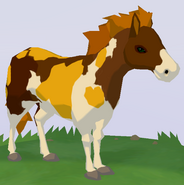 Add a photo to this gallery
Retrieved from "https://parody.fandom.com/wiki/Chincoteague_Pony?oldid=2421677"
Community content is available under CC-BY-SA unless otherwise noted.