The Chinese dragon is a legendary creature in Chinese mythology and Chinese folklore. The dragons have many animal-like forms such as turtles, fish, and imaginary, but they are most commonly depicted as snake-like with four legs. Chinese dragons traditionally symbolize potent and auspicious powers, particularly control over water, rainfall, typhoons, and floods. The dragon is also a symbol of power, strength, and good luck for people who are worthy of it. With this, the Emperor of China usually used the dragon as a symbol of his imperial power and strength. In Chinese daily language, excellent and outstanding people are compared to a dragon, while incapable people with no achievements are compared with other, disesteemed creatures, such as a worm. A number of Chinese proverbs and idioms feature references to a dragon, such as "Hoping one's son will become a dragon". Historically, the dragon was associated with the Emperor of China and used a symbol to represent imperial power. The founder of Han dynasty Liu Bang claimed that he was conceived after his mother dreamt of a dragon. During the Tang dynasty, Emperors wore robes with dragon motif as an imperial symbol, and high officials may also be presented with dragon robes. In the Yuan dynasty, the two-horned five-clawed dragon was designated for use by the Son of Heaven or Emperor only, while the four-clawed dragon was used by the princes and nobles. Similarly during the Ming and Qin dynasty, the five-clawed dragon was strictly reserved for use by the Emperor only. The dragon in the Qing dynasty appeared on the first Chinese national flag. The dragon is sometimes used in the West as a national emblem of China. However, this usage within either the People's Republic of China or the Republic of China on Taiwan as the symbol of nation is not common. Instead, it is generally used as the symbol of culture. In Hong Kong, the dragon was on the Coat of arms of Hong Kong during colonial time. Now it is part of the design of Brand Hong Kong, a symbol used to promote Hong Kong as an international brand name. The Chinese dragon has very different connotations to European dragon – in European cultures, the dragon is a firebreathing creature with aggressive connotations, whereas the Chinese dragon is a spiritual and cultural symbol that represents prosperity and good luck, as well as a rain deity that fosters harmony. It was reported that the Chinese government decided against using the dragon as its official 2008 Summer Olympics mascot because of the aggressive connotations that dragons have outside of China, and chose more "friendly" symbols instead. Sometimes Chinese people use the term "Descendants of the Dragon" (simplified Chinese: 龙的传人; traditional Chinese: 龍的傳人) as a sign of ethnic identity, as part of a trend started in the 1970s when different Asian nationalities were looking for animal symbols as representations, for example, the wolf may be used by the Mongols as it is considered to be their legendary ancestor. The dragon is the symbol of Chinese emperor in many dynasties. During the Qing dynasty, the Azure Dragon was featured on the first Chinese national flag, until Qing collapsed. It featured shortly again on the Twelve Symbols national emblem, which was used during the Republic of China, from 1913-1928. 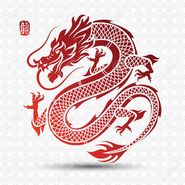 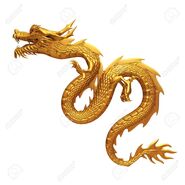 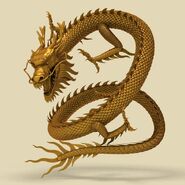 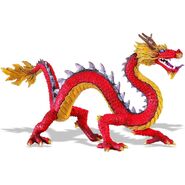 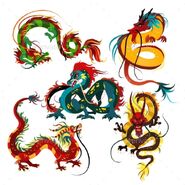 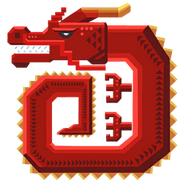 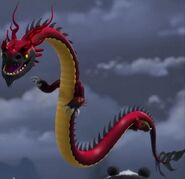 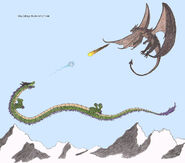 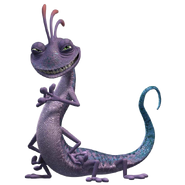 Retrieved from "https://parody.fandom.com/wiki/Chinese_Dragon?oldid=2655270"
Community content is available under CC-BY-SA unless otherwise noted.