The Chinese giant salamander (Andrias davidianus) is the largest salamander and largest amphibian in the world, reaching a length of 180 cm (5.9 ft), although it rarely reaches that size today. It is fully aquatic and is endemic to rocky mountain streams and lakes in China. It has been introduced to Kyoto Prefecture in Japan and possibly Taiwan. It is considered critically endangered due to habitat loss, pollution, and overcollection, as it is considered a delicacy and used in traditional Chinese medicine. It has been listed as one of the top 10 "focal species" in 2008 by the Evolutionarily Distinct and Globally Endangered (EDGE) project. The Chinese giant salamander is considered to be a "living fossil". Although protected under Chinese law and CITES Appendix I, it is estimated that the wild population has declined by more than 80% since the 1950s. 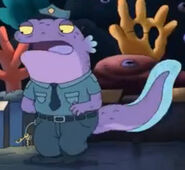 Add a photo to this gallery
Retrieved from "https://parody.fandom.com/wiki/Chinese_Giant_Salamander?oldid=2573788"
Community content is available under CC-BY-SA unless otherwise noted.