The Parody Wiki
Register
Don't have an account?
Sign In
Advertisement
in: Characters, Animals, Asian Animals,
and 16 more

The peculiar-looking Chinese pangolin (Manis pentadactyla) is one of just eight species belonging to the order Pholodia, meaning ‘scaled animals'. The pangolin is also known as a scaly anteater because, despite not being closely related to anteaters, it is highly specialised in feeding solely on ants and termites. The elongate, streamlined body and long, flat tail of the Chinese pangolin are covered in brownish scales, except for the soft, off-white underside and much of the face. These scales are actually formed from fused hair, and contribute to 25 percent of the Chinese pangolin’s total weight. When in danger, the pangolin can roll into a ball, leaving only the scaly parts of its body exposed, protecting the pangolin from predators. The name ‘pangolin’ actually arises from a Malayan word meaning ‘the roller’. The head is small compared to the size of the body, with small eyes and, unlike some other pangolin species, external ears. It is highly adapted to its diet of ants and termites, with long claws (up to five centimetres long) that can rip open termite and ant nests, and a long, thin tongue, measuring up to 40 centimetres in length, that scoops prey into its toothless mouth. In Mandarin, the Chinese pangolin’s name ‘Ling-Li’ means ‘hill carp’ which refers to its brownish-yellow scales being similar to those of Chinese carp, whereas in Cantonese its name means ‘animal that digs through mountain’. 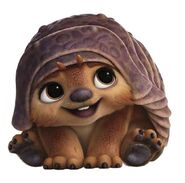