The Parody Wiki
Register
Don't have an account?
Sign In
Advertisement
in: Madeline Characters, Main Characters, Supporting Characters,
and 66 more

Chloe (French: Cloè) is one of the twelve little girls, earning her name from the Greek noun Khlóē, which refers to a young green sprout. She is close to Madeline, along with Genevieve, Danielle and Nicole, and is considered second-in-command of the group, replacing Madeline if she isn't around.

Chloe is a French girl with long, carrot-orange (later on appearing dull orange-brown) hair. On one of her dolls, her hair is a dark auburn.

Chloe takes on the role of a big sister, and cares deeply for Madeline. She is thoughtful towards her needs and often worries over her. Like Madeline, she also possesses good detective skills and can be a leader in times of need. As seen in Madeline and the Old Violin, Chloe is a hard worker and very persistent, as throughout the episode she can be seen practicing playing the violin all day and late at night. Her efforts were rewarded with her being the best musician, that is until she broke her arm. 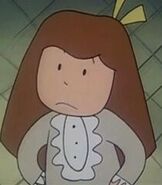 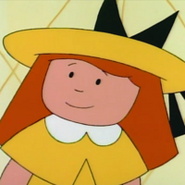