Christopher Daniel Barnes (born November 7, 1972), also known professionally as C.D. Barnes and C.B. Barnes, is an American actor. He is best known for his voice role as the title superhero of the 1994 animated television series Spider-Man, Prince Eric from The Little Mermaid, as well as his on-screen portrayal of Greg Brady in the films The Brady Bunch Movie and A Very Brady Sequel. He was also once the national teenage spokesperson for Greenpeace. Barnes earned his BA in 2004 and his MA in 2009 and enjoys reading, writing short stories, playing the guitar, and practicing yoga. 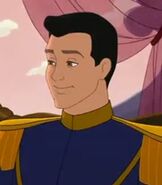 Peter Parker/Spider-Man
Spider-Man (1994-1998)
Add a photo to this gallery
Retrieved from "https://parody.fandom.com/wiki/Christopher_Daniel_Barnes?oldid=1253964"
Community content is available under CC-BY-SA unless otherwise noted.