Chuck is the Burners' computer programmer and is the brains of the group. He rides shot-gun in Mutt, but has his own car, Blonde Thunde

Chuck is the second tallest member of the group but he often slouches. Chuck hides behind his medium length blonde hair but on a few occasions, he pushes his bangs out of the way to reveal his eyes. Chuck has a large sloping nose and freckles.

He's often seen with a blue, 3/4 sleeve shirt with the Burner emblem across his chest along with dark blue jeans and (dirty) white shoes.

In Raymanthia, Chuck is known as "Lord Vanquisher", King of the Realm. He wears a long green hooded cloak.

Chuck is self-conscious, socially awkward, and the most cautious member of the Burners. Chuck often has a low opinion of himself because he lacks the same daredevil trait that the other Burners possess; however, despite his reluctance to face danger head-on, Chuck always stands by Mike's side, even when he makes a bad call. (He just won't get in the car with him.)

Chuck does have an alternative persona on the weekend when he assumes his role as "Lord Vanquisher" with his LARP group. Here, Chuck gets to live out his fantasy as a strong, reliable leader.

Chuck is a computer genius who can hack his way anywhere with ease. Even in the thick of battle, Chuck can launch laser canons, calculate several escape route possibilities, all while screaming at the top of his lungs.

Chuck isn't really a skilled fighter when it comes to hand-to-hand combat (possibly due to his own anxiety and fear,) but he does have his own weapon, a hi-tech retractable slingshot.

Chuck in his pissed persona. 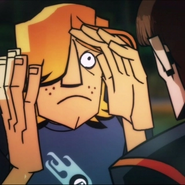